For the first time ever, no Roman numerals in the Super Bowl 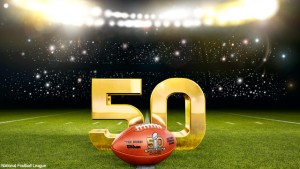 Since the beginning, in the LA Colosseum, a simple monolithic ‘I’ denoted which Super Bowl it was. But now, now that Super Bowl Five-Oh is here, it won’t be recognized in traditional Roman numerals when it’s played on February 7, 2016 at Levi’s Stadium in San Francisco. The NFL will use the Arabic numeral ’50’ instead of the ‘L’. No one probably even considered this until this year; definitely not Super Bowl 10 — X or 40 — XL. I mean X’s are cool, right? The physiognomy of a collection of letters in a word, or even one single alpha numeric symbol for that matter can influence the way people feel about whatever it is representing. I mean who wants to watch Super Bowl ‘L’? Many sports fans probably can’t count higher than XXII anyway so it makes sense. Kinda. Like my Grandfather, Luther Henry (Hank) Sutton once said to me before a high school football playoff game which we traveled to Kern Valley to play, and won, the weekend after thanksgiving, Man, it was cold there that night. But I regress, I can still hear his words: “Give ’em El!” Who knew they’d ring true in Super Bowl Fifty?